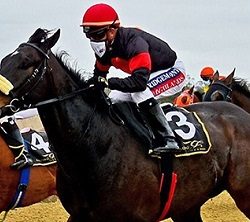 Wilgerbosdrift’s ill-fated stallion Soft Falling Rain has come up with a remarkably consistent son in the form of Marmara Sea. The latter made it eight wins from as many starts on the polytrack, and in the Eastern Cape, when he won the Listed Memorial Mile (1600m) at Fairview on Friday afternoon. Marmara Sea, who is Read more about Soft Falling Rain son lands Memorial Mile[…]

Wilgerbosdrift’s inform resident stallion Flower Alley enjoyed a good day at Turffontein on Thursday when the Travers Stakes winning son of Distorted Humor supplied a pair of winners. Flower Alley’s first success on Thursday came when his 3yo daughter Perfect Angel romped home to break her maiden in the third race.Under S’Manga Khumalo, the Alec Read more about Thursday double for Flower Alley[…]