It had to only be a matter of time before Mike De Kock would grab a Cape Summer Of Champions Gr1 trophy and the multiple champion trainer did it in style courtesy of a superb display of big race riding and timed-to –the-minute preparation to score his fourth win in the Cape’s premier classic. 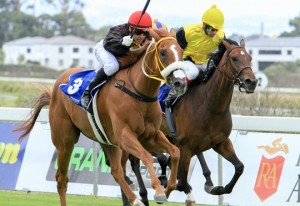 De Kock has not had the most memorable of summers by his own high standards but Gr2 Dingaans winner Noah From Goa demonstrated his heart and class to make it a top two finish for the Gauteng visitors.

And Avontuur sponsored Anthony Delpech maintained his outstanding streak of form that makes him the best jockey to have in the irons for the big days.

The R1 million Grand Parade Gr1 Cape Guineas build-up was largely dominated by the presence of the Mike Bass star filly Silver Mountain, who was attempting to become only the second member of the fairer sex in history to win the fillies’-colts’ double.

But the hyped and hoped for fairytale was not to be as Silver Mountain failed to accelerate in the final stages, opening the door for Noah From Goa to charge clear and hold off the flying efforts of Brazuca, and the promising Nassa, who ran a peach of a race from the 17 draw. 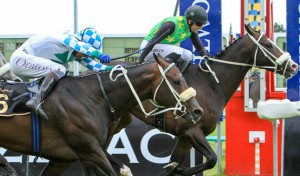 Selangor Cup winner Hard Day’s Night led Budapest into the home straight and Marcus tried to get his mount to kick down the centre.

Noah From Goa was poised in third and Anthony Delpech was alive to the threats as he went for his run at the 350m marker and grabbed a length, with Silver Mountain starting her run and weaving her way through.

Delpech kept his mount slightly inside of centre and rode for his life as Noah From Goa stayed on best to beat Brazuca by 0,75 lengths in an unconfirmed time.

The low-flying Nassa’s presence a further head back in third made it a memorable race for Wilgerbosdrift Stud, who also bred the winner. 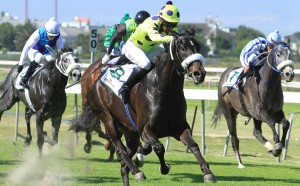 Silver Mountain clung gamely to fourth and under a length off the winner.

The Cape 3yo form was put into perspective by a few bruised egos and disappointments downfield.

These included the Selangor Cup winner Hard Day’s Night who faded out to tenth and 4,75 length off the winner. 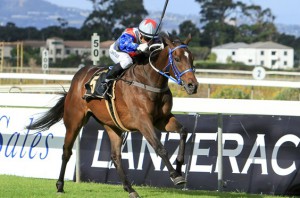 Noah From Goa’s victory broke the ice for Mike De Kock after a twelve year wait following Domino Man’s memorable beating of Dynasty in 2003. Previous De Kock winners include the ill-fated Flight Alert in 2002 and the outstanding Horse Chestnut in 1999.

Wearing his sponsor’s sought-after bright purple Oratorio cap, Delpech suggested afterwards that ‘the boys are maybe a little bit better than the girls’in a reference to the absence of a fire fight from Silver Mountain.

“Noah From Goa struggled to go round the turn and was on the wrong leg all the way round – even in the straight he was running out. But he is a top horse and proved it here.’’

With his Dad in Dubai, Matthew De Kock was on course to do the saddling honours after Clayton Mathee had looked after Noah From Goa and Cape Summer Stayers runner-up Kingston Mines in the Kenilworth  on-course stables.

The A-Team. Delpech and De Kock

“There was a lot of talk about the Cape horses but our boy showed his mettle today. He just seems to get bigger and after every start. I must thank Clayton who has been here the whole week. Thanks to New Turf Carriers too for moving us so smartly. Noah From Goa has had a hard season – let’s see how he pulls up before we make any decisions about his future plans,” he said in response to the usual enquiry.

The Wilgerbosdrift Stud-bred Noah From Goa is a son of the ill-fated Tiger Ridge out of the five-time winning Fort Wood mare, Limerick.